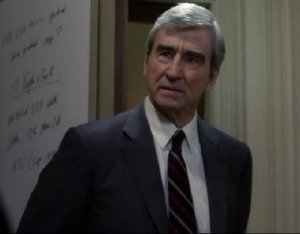 I don’t watch Law & Order anymore; I have changed my mind about what qualifies as edifying for me (like: the stupefied watching of violent TV really isn’t, as it turns out.) But I did like that sound, and of course Jack McCoy: so serious, so morally (sort of) upright, so tortured.

But, speaking of edifying TV, I have recently discovered The Newsroom. (Love Aaron Sorkin.) And there he is–Jack–only now he’s Charlie! (Okay, okay: I know that Jack and Charlie are characters and Sam Waterston is the actor, but bear with me here.)

This new Jack, whom we now must call “Charlie”, is more mussed-up, more relaxed, more expressive (I never saw Jack McCoy fling his arms out and shout profanity, for example.) And…wait for it…he wears a bow tie. He has changed, and I like him better. He’s so adorable, and yet it’s a teensy bit unnerving: here is the same guy only in a new persona, with a new name. It takes a little getting used to, but I’m committed to going along with it because I guess Jack/Charlie knows what he’s doing. (By the way, I did not take these pictures.)

We all know people who have suddenly changed what they want to be called. Maybe they have, like Jack/Charlie gotten a new job, or grown up, or experienced an epiphany or a calling, or just wanted to try something new.

There is a lot to a name, actually. Think of all those people in the Bible whose names changed when God called them to something new. In the Hebrew tradition, to know someone’s name is a deeply intimate thing, which is why the tradition is to render the name “G-d”, out of respect, as a recognition that the Divine is unknowable.

Whatever true or untrue masks we wear, God already knows each of us by name, by our True Names. Richard Rohr says we can only be our true selves when we stop hiding: from God, ourselves, and at least one other person. We are not all called to be the same, but to be ourselves. Our true selves.