Be kind; everyone you meet is fighting a hard battle. (Somebody)

I am a regular user of a certain form of social media (which shall remain nameless because I don’t want the All-SeeingSuckerBorg to read this and start sending me personalized messages. Plus, the way I just said “regular user” makes me think I need help. I admit I am powerless.)

Anyway, in that space it has been all the rage lately to share stories with headlines like: “Man Pays Restaurant Tab for Single Mom” and “Burger King Employee Holds Umbrella for Disabled Customer.” Usually the person posts the story saying something like “This restores my faith in humanity.” These things do (sometimes) warm the heart to varying degrees, but there is also a sense that one is whistling in the dark, offering slim evidence that, despite all evidence to the contrary, people are still basically good.

GAAH! My problem is not with acts of kindness, of course. My problem is that if a teensy, sentimental confection restores your faith in humanity, you haven’t been paying enough attention. Let’s wake up, people! For God’s sake! Goodness permeates our world. In the great tale of the creation of the world (Genesis & 2), God declares Creation to be good. To my knowledge this announcement has not been rescinded.

YES: People are screw-ups (starting with Adam and Eve.) And YES: sometimes all the sadness and badness tempts us to lose faith. But I say to you this Truth: every day, lots and LOTS of people do the right, kind thing over and over.  The Truth of the matter is that kindness is, actually, all around. All the time. We do humanity an injustice by acting all surprised at the good news packaged in National Enquirer-type headlines. Sensationalizing anything robs it of its power. Love has great power, and the power of Love will win. (If you need a boost, I recommend listening to David Wilcox’s Show the Way.)

Some years ago, when the expression “practice random acts of kindness and senseless beauty” started gaining traction, there was a kind of post-70s sweetness to it. It was a nice thought and made a swell bumper sticker. (The idea has its own Wikipedia article, by the way.) But once any movement becomes self-aware, it starts to go stale, and people get jaded. Throw in a few catastrophic, world-wide disasters, and over the years a kind of Bad News Hypnosis has set in. We must practice not only doing the acts of kindness themselves (random… senseless… hey, whatever works for you) we have to practice seeing kindness in the world, too.

In this week where the Episcopal Church’s calendar celebrated the 50th anniversary of the death of C.S. Lewis (the same day last week as that other anniversary): I offer this bracing bit from Puddleglum the Marshwiggle: “Suppose we have only dreamed, or made up, all those things-trees and grass and sun and moon and stars and Aslan himself. Suppose we have…Suppose this black pit of a kingdom of yours is the only world. Well, it strikes me as a pretty poor one. And that’s a funny thing, when you come to think of it…I’m on Aslan’s side even if there isn’t any Aslan to lead it. I’m going to live as like a Narnian as I can even if there isn’t any Narnia.” (The Silver Chair, 1953)

P.S. OK, I admit that this story, involving a crap-ton of volunteers and thousands of dollars to make one kid’s wish come true? I really love this. It kind of restores my faith in humanity.

P.P.S. What kindness have you done or received recently? 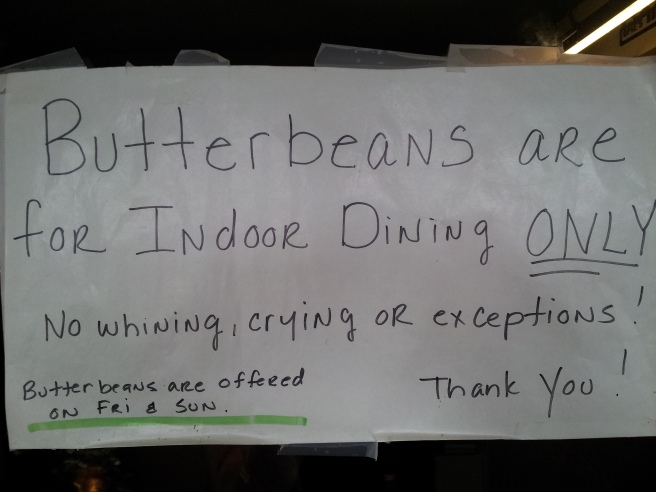 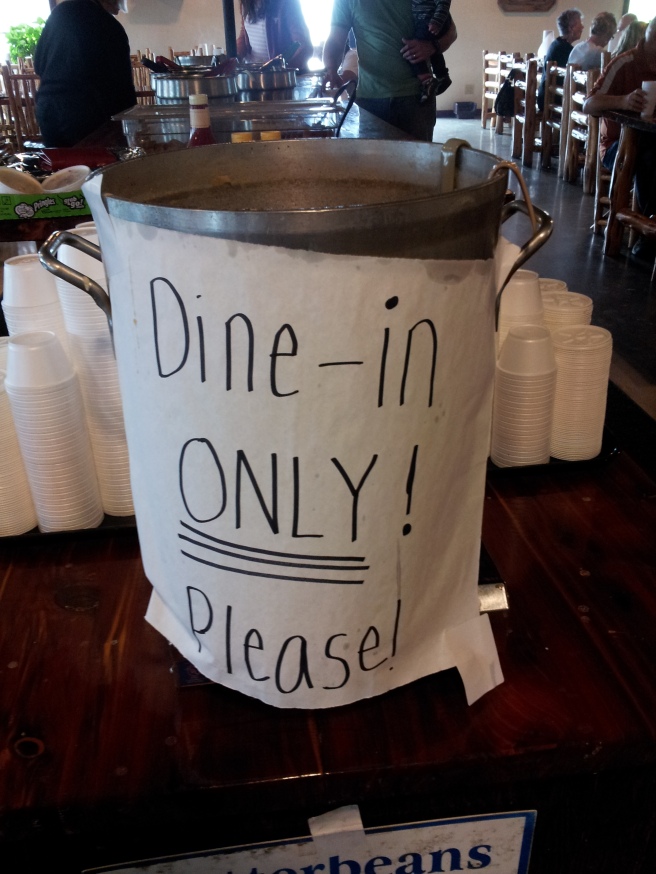 People are crazy and times are strange. (Bob Dylan)

A renowned Texas Hill Country barbeque joint recently taped hand-lettered signs to every entrance door. In all caps and with the liberal use of exclamation marks and underlining, the customer was thereby notified that effective immediately “BUTTER BEANS ARE FOR DINE-IN ONLY!!!!! NO CARRY OUT!!!” Not that I cared. Add all the butter you want, they are still just lima beans, to which I have a lifelong aversion.

This is one of those restaurants where you select your own side of beef, or hunk of pork, or slab of ribs from a smoker, and you buy it by the pound. As you move along the counter, you have your choice of side items which run the full gamut from starch to sugar to starch. A nice woman offered to help me, but I was already being helped and didn’t want to create a problem by using up more than my share of helpers. “Oh, honey,” the woman said, “you won’t make a problem any bigger than The Great Butter Bean Controversy.”

As the nice woman explained it (with a fair amount of eye-rolling, it must be said): apparently the Dine-In Regulars insist that there be butter beans available whenever they want them. And apparently the Take-Out Customers have a tendency to take out more than their share, thereby creating a shortage. 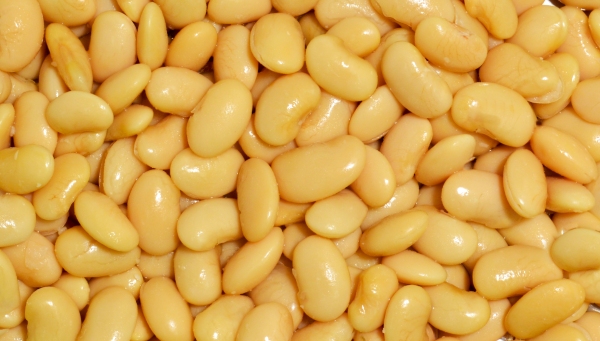 It has come to this, then? You allow the world get all hateful about politics and religion, and what happens? The next thing you know: you’ve got a butter bean battle boiling. What is WRONG with people? Don’t you just wonder why is it is so hard simply to do right and leave each other alone and respect one another’s needs for butter beans? (OK: you don’t wonder this. This failing is human nature, a tendency from our earliest years. I once was admiring a line-up of kindergarteners walking along with their hands in their pockets, like tiny hipsters. I remarked to my friend their teacher that I had never seen such chilled-out and relaxed kids. “No,” she said. “I made them do that so they would stop bothering each other.”)

But back to the nice woman at the barbeque place. After she explained the controversy, I asked were they really that good, because, come on…lima beans? “Here’s what you do,” she said. “Take this container to the ‘extras’ buffet and get yourself some butter beans. Sit down at a table, have a bite, and then put a lid on them and take them home.” Impressed by her total disregard for the Oppressive System (I was a child in the 60s, after all,) I did as she suggested.

And my eyes were opened. Epiphany. Spiritual experience. The beans were obviously cooked with love and onions by somebody’s granny, and I think this anonymous granny has changed my life. I did not feel one teensy bit bad about taking those butter beans right on out of the restaurant, along with my slabs of meat.

But I did wonder later: is my spiritual experience more important than that of those who follow me, or, for that matter: more important that that of those who dine in a different way than I do? At the same time, do the Dine-in Regulars have the right to deprive me, a Take-Out? I love this barbeque joint, but do I have to be IN THE RESTAURANT to have the experience? Who gets to control the Spirit?

Signs, signs, everywhere are signs
blocking out the scenery, breaking my mind
“Do this, don’t do that”
Can’t you read the signs?