The vision is here, the dream is here, the unseen presence is here. What we are to become is dancing along with us even now, just out of sight. If we listen, if we are attentive, if we are obedient to this new, true self in Christ, it will lift us overhead and help us fly.
(Br. Mark Brown, SSJE)

You know how when all you have is a hammer, everything looks like a nail? I’m that way with a worthy metaphor. When an image or a story hits me in that really profound way, all of a sudden I can flex that truth to fit any situation. To quote Phoebe Buffay: A good metaphor is “very bendy.”

And so it is with Indiana Jones and the invisible path. It is one of the all-time great metaphors, and often comes up in discussions of faith (topics like “having faith” and “stepping out in faith.”) Of course we have the deeply spiritual existentialism of Stephen Spielberg to thank for this. In 1989’s “Indiana Jones and the Last Crusade,” Indy is searching for the Holy Grail of Christ, because the Nazis shot his dad. (That’s Spielberg for you: Nazis and father issues.) Indy’s quest grinds to a dangerous halt when he is suddenly confronted by the brink of a bridgeless, bottomless pit. The prize is on the other side of the abyss, and Indy is frozen in place. Can’t go back, can’t go forward. 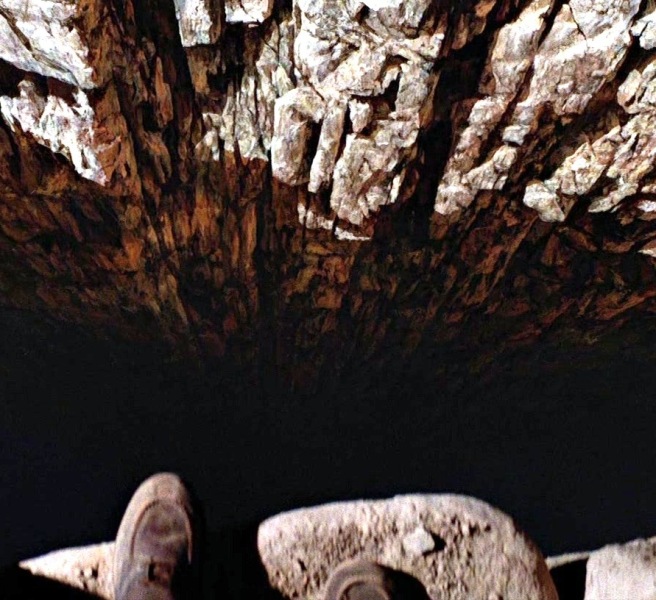 I don’t know about you, but this scenario is painfully familiar to me, this feeling of being stuck. Can’t go back, can’t go forward. Going back (to a previous way of life, to a bad decision: whatever) isn’t an option, because I’m all in: the Nazis have shot my dad and I have to keep going. But moving forward doesn’t seem to be an option either because there’s no damned path, just a bottomless pit and your brain is screaming “DANGER, WILL ROBINSON!!”) I may not be a genius, but I know better than to step out into open air.

The magic moment in the scene occurs when Indy decides that his only option is to step into the blank space…and the path appears.

Now, most often one hears this scene used as a metaphor for “stepping out in faith.” And that’s fine. Indy may well be stepping out in faith and finding a path that he just didn’t see before. But THAT kind of “faith” has the whiff of fear and luck to it: what if there is only one path and I don’t happen to hit it? Better not to step out at all. I’ll stay stuck, thank you very much.

I think what’s happening with Indy’s step has a far deeper significance. I think that by committing to taking the step, Indy actually helps create the bridge across the abyss. Indy somehow refuses to accept that he is stuck. He has no choice but to move forward, and his stepping out creates the way.

The Creator of the universe doesn’t expect us to be omniscient. It is not as if we have to guess at every right step along some top-secret path for which we don’t have security clearance. Faithful travel means to take the steps that seem right, and keep asking God for help as we go. (Think of God as a divine GPS, maybe with Emma Thompson’s voice.)

Sometimes having faith is a matter of having confidence that, as Br. Mark says, “what we are to become is dancing along with us even now, just out of sight” and that the presence of God will give us flight. We are co-creators with God, creating something that did not exist before: ourselves. The one who made the Pleiades and Orion, and turns deep darkness into the morning, will dance with us as we travel.